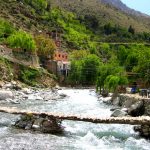 Arrival at the Casablanca airport. Your guide will pick you up and be escorted to your hotel (depending on the arrival time).

Today after breakfast at the hotel, you will have a brief visit to the city of Casablanca, the largest city in Morocco, it is the heart of commerce and industry, you will visit the Hassan II Mosque built on water along with the Ocean Atlantic. Later, you will leave for Rabat.

In the morning after breakfast at the hotel, we head towards Meknes, it is the third imperial city of Morocco, with its famous gate, it is known as “the Versailles of Morocco. You will explore Bab Mansour, one of the most beautiful gateways Continue your tour by visiting the mausoleum of Moulay Ismail You will have time to have lunch and visit the old and the new Medina Later visit the city of Moulay Idriss Zerhoun, a pilgrimage site for Moroccans, then you will discover the ancient ruins Roman from Volubulis. Finally we will arrive at traditional Moroccan Fez.

In the morning after breakfast, you will have a guided tour to explore the royal city of Fez, you can walk and get lost in the medieval medina (old city) with its walls and narrow streets, it was declared World Heritage by UNESCO in 1981 You will see the ruins of the 16th century Merinid tombs, as well as you can visit the Bouanania medresehs and Attarine, built in the 14th century by the Merinides, the Karaouine Mosque (the former teaching center of Islamic culture), and the Nejjarine Museum marble fountain.

You can have your lunch in a typical Moroccan restaurant of those in this beautiful city. After restoring forces you can continue with your visit, you will be able to see the decorated Bab Boujeloud door, medieval tanneries, the Royal Palace, visit of the souks (local markets), in which merchants and artisans sell their handmade jewelry , leather goods, pearls and ceramics.

Accommodation in a hotel or riad.

After a good breakfast at the hotel, departure to Marrakech (the pearl of the south) through the East Atlasvia Ifrane, Azrou and Beni Mellal.

In Ifrane known as “the Moroccan Switzerland”, you can see the stone lion before continuing our Azrou campaign. Later, you will have the opportunity to see the old tree (800 years ago, called Cedro Gouraud) and see the monkeys in the cedar forest. From here we cross Azrou, a Berber town known for its green tile roofs. We will arrive at Beni Mellal, where you can enjoy your meal.
After restoring forces you can visit the impressive waterfalls d’Ouzoud, these falls descend almost 330 feet (110m)

We will arrive in Marrakech where we will stay in a hotel or Riad.

After breakfast in your riad you can spend the day tourism in Marrakech, the imperial city of the countries of the South. You can visit the Koutoubia Mosque and admire its tower, the Majorelle garden, a botanical garden, with its wide variety of plants, the 16th century Saadian Tombs, all decorated in mosaic colors, the 19th century palace east bay with its beautiful architecture .

After lunch in the afternoon, you will have time to explore the souks and the fascinating alleys around Djemâa El-Fna Square. At night, you will be captivated by snake charmers, singers, acrobats, dancers, storytellers and storytellers, moving from one group to another.

In the morning after breakfast, we leave Marrakech “red city” towards Essaouira where you can visit an Argan women factory and learn about the process of making argan oil. You will explore the port of the coastal city of Essaouira, you can also enjoy a lunch of fresh seafood in the medina. The afternoon can be more relaxed, depending on the time of year you can swim, walk and relax on the beach.

Today we will leave Essaouira through the coastal road, admiring the beautiful views. We will pass by Safi then Oualidia where you can enjoy some delicious seafood in this wonderful place. After lunch we will continue to El Jadida (it was known as Mazagan), this old medina was established in 1513 by the Portuguese, it is the fortified city of Morocco.

We will arrive in Casablanca first thing at night, where we will stay in a hotel.

After breakfast at the hotel and transfer to the airport according to the flight departure time.