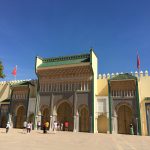 1 Week in Morocco / 8 Days From Casablanca

Today after breakfast at the hotel, you will have a brief visit of the city of Casablanca, the largest city in Morocco, it is the heart of commerce and industry, you will visit the Hassan II Mosque built on water along with the Ocean Atlantic. Later, you will leave for Rabat.

After breakfast, we will leave for Meknes, a city that grew  to the Sultan Mulay Ismail, where if we want we can take a guided tour where you can see the Hdim square, Bab Mansour, the great door that is the entrance to the old city and the Jewish quarter, the barns and the true city wall.

27 km from Meknes are the ruins of the Roman city of Volubilis where we will stop to see the Roman ruins and Moulay Idriss, Holy City before reaching Fez.

Accommodation in a traditional riad.

After breakfast, we will have a guided tour of the imperial city of Fez. Full day devoted to the discovery of the city, its culture and religious world. Numerous are the monuments that we can visit: Medersas,(Koranic schools), Chahrij Bouinania Attarin. Also others like Souks, Fez El-Jedid, the Karaouine Mosque (first university in the world). Free time to get lost in its narrow cobbled streets.

After breakfast, departure to Merzouga through the Middle Atlas region. We will go through Ifrane, the “Switzerland of Africa” ​​for its buildings with gable roofs. We will pass through Azrou through the national park known for its cedars where the berber monkeys are located.

Next, we will cross the Ziz Valley that will take us to Erfoud known among things things for its fossils. Thus, we will reach the desert where we change the 4 × 4 for camels. With them we will discover the dunes until we reach the camp in the heart of the desert where they will receive us, by the Sahara tradition, with a rich Berber tea. We will spend the night in the camp under a rain of stars in the desert and listening to the traditional music of the Berbers.

Dinner and accommodation in the desert camp.

We get up early to see the spectacular sunset over the dunes before taking our way back to the hotel for breakfast and a shower.

We will go to Rissani where we will make a stop, this place is known for its souk, one of the most traditional markets in southern Morocco, where we can even find a parking lot of donkeys and nomads who come to buy their supplies.

Then we will go towards the Todra Gorges, where you will be enchanted by its towering rock walls, a favorite place for climbers. There, we will visit the Todra Gorges and continue our journey through Morocco to the Dades Valley and then cross the Valley of Roses and the Valley of the Thousand Kasbahs. There, we will observe the kasbahs that are located in the middle of this valley of palm trees and then we will go to Ouarzazate. We will arrive in Ouarzazate also known as the “Hollywood of Morocco” where we will visit Kasbah Taourirt and if you like we can also visit the film studios.

Dinner and accommodation in a riad/hotel.

After breakfast, we will tour the Kasbah of Taourirt and after 25 km of the route we will visit the Kasbah of Ait Ben Haddou, declared a World Heritage Site by UNESCO. She is famous for being the place of film productions such as “Lawrence of Arabia,” “Heaven Protector” or “Babel.” We will continue with a visit to the traditional Berber village of the High Atlas and the Kasbah Telouet Glaoui.

We will follow the path through the Tichka port that will connect us to the “Red City”, Marrakech.

Already in the evening in Marrakech, you will be captivated by snake charmers, singers, acrobats, dancers, storytellers and storytellers, moving from one group to another.

Upon arrival, we will go to the hotel. We will have free afternoon.

accommodation in a riad.

After breakfast in your riad you can dedicate the day to tourism in Marrakech, the imperial city of the countries of the South. You can visit the Koutoubia Mosque and admire its tower, the Majorelle garden, a botanical garden, with its wide variety of plants, the 16th century Saadian Tombs, all decorated in mosaic colors, the 19th century palace east bay with its beautiful architecture .

After lunch in the afternoon, you will have time to explore the souks and the fascinating alleys around Djemâa El-Fna Square.

Enjoy dinner at one of the many terraces of the Plaza.

Free morning to go shopping or relax in Marrakech before leaving in the middle of the afternoon to reach Casablanca. Your 1 week in morocco end in Casablanca.